Until the mid 1800's, Easton's children were taught at home or at church. Built in 1893, the Governor Wolf School building has elaborate brickwork, stained glass windows, a bell tower and a spiral staircase in the left tower. The stone entry, called Penny Arch, is topped by a marble globe of the world paid for by school children's pennies. The Wolf Building now houses Northampton County Human Services.

The former school on North Second Street was named for Governor Wolf of Easton, founder of the Pennsylvania Free Public School System and proponent of the 1834 School Act.

The Act was zealously supported by Wolf but was met with great resentment by the local German population, who feared that formal instruction would be in English. The farming population also opposed the act because adults needed the children at home for farm chores. The loss of church-based education added hostility. Had it not been for Wolf's determination, the act may have been repealed. It did, however, cost him his bid for re-election.

Herman Simon, a wealthy silk manufacturer of the early 1900's, built his mansion on North Third Street (now home to The Third Street Alliance for Women & Children), The Simon mansion was designed by noted Architect William Michler and is of a High Renaissance French Chateau style.

The exterior of the building is graced with Indian limestone, granite base, and a red Vermont Slate roof with cooper ornamentation. Elaborate carved woodwork and d'Ascenzo stained glass grace the interior skylight and stairwell; an original Delft Kitchen also remains. The mansion was built at a cost of $250,000. Directly adjacent, Simon built a home for his daughter. Massive cast iron gates remain, which once led to the formal gardens. Carved images of Simon's wife and daughter are still distinguishable on pillars outside the mansion.

In 1807, Jacob Nicholas, a Delaware River Boat Captain, built his home at Fifth & Ferry Streets. Nicholas plied the riverboat on the Delaware River, hauling goods from Philadelphia to Easton. The boat sailed or drifted down the river to Philadelphia, then long wooden poles were used for "poling" the boat back up the river to Easton. The Nicholas house has been restored with most work completed in 1990. It is furnished with authentic furnishings provided by the Northampton County Historical and Genealogical Society. The building is one of the very few restored structures in the nation that illustrate life at home for a typical working person or family. The "Little Stone House" is owned by the City of Easton.

The Lafayette Arch, at the base of College Hill, is constructed of stones from the Traill Green Observatory, which was once part of the Lafayette College Campus. The observatory itself was built in 1864, by faculty member, trustee, and prominent local physician, Dr.Traill Green.

In 1914, the observatory was moved, then in 1929 torn down to make room for Colton Chapel. The arch was a gift of the Class of 1929, both commemorating the bygone observatory, and creating a welcoming gateway to the college campus.

On Christmas Eve 1824, the Easton Centinel carried a notice calling upon residents of Northampton County "f

riendly to the establishment of a COLLEGE at Easton" to meet three days later at White's Hotel on Centre Square. Led by James Madison Porter, a prominent local lawyer; Joel Jones, another lawyer and graduate of Yale; and Jacob Wagener, a local miller's son notable for his interest in mineralogy and botany, the assembled citizens worked out a plan for a college "combining a course of practical Military Science with the course of Literature and General Science pursued in the Colleges of our Country."

Because the country was then in a fever over the farewell tour of the aged Marquis de Lafayette, whom Porter had met in Philadelphia the previous August, the founders voted to name their new college for the French hero of the Revolution as "a testimony of respect for (his) talents, virtues, and signal services....the great cause of freedom."

The Governor of Pennsylvania signed the new college's charter on March 9, 1826, but getting the charter proved to be considerably easier than launching the College. In 1832, the Rev. George Junkin, a Presbyterian minister, agreed to move the curriculum and student body of the Manual Labor Academy of Pennsylvania from Germantown to Easton and to take up the Lafayette College charter.

The next stop on our tour takes you down Larry Holmes Drive, appropriately named in 1983 for Larry Holmes, World Heavyweight Boxing Champ from 1978 to 1985. He was undefeated for a record 13 years. Larry 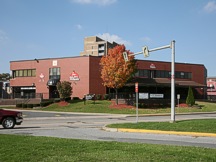 calls Easton home, having lived here since age 5. At age 13, he quit school to help support his family and worked as a shoe shine boy, learning to box at the local gym. At age 23, Holmes beat Rodell Dupree in his first professional bout. He is ranked as one of the top ten heavyweights in the world, with an incredible record of 68-5, including 41 knockouts.

Larry Holmes today is a successful entrepreneur with various real estate holdings, including the L & D Plaza where a vast array of the champ's memorabilia is on display.

Philadelphia Federal Style architecture with late Victorian bracketed cornices proudly announces Library Hall, site of Easton's first library. Located at the Northwest corner of Second and Church Streets, Library Hall was built in 1811, and like most of the city's older buildings, is fully functional and in commercial use. 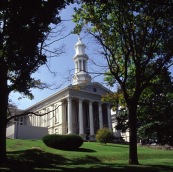 Northampton County was founded on March 6, 1752. The first court proceedings were held in taverns. The first court house was built in 1765 in Centre Square, then known as "the Great Square." The current courthouse, located on Seventh and Walnut Streets, was designed by Architect G. Graham, Esquire and was built in 1861. To learn more about the County, visit here.